Habbo Helpers, are a system of volunteer Habbo's who moderate user reported cases of abuse by voting on them with other helpers that are active at that time. Due to its nature, anyone can become a helper and vote on cases.

Following the Great Mute of June 2012, Habbo Helpers was one of the many initiatives that Sulake created and is a throwback to the old "Habbo Guides" system.

The Habbo Helpers system was released on June 7, 2012 in the .COM hotel. It was met with mixed responses, many users citing that other users 'Troll' the system by submitting fake requests for help. Other users expressed that it's a great way to have better moderation, since users are a part of the process and they can choose what is best for their fellow players.

A few months after the Great Mute a new rank of Habbo Helpers was released. This was the Guardians rank. With this rank of Habbo Helper a user is able to vote on bullying requests to determine the fate of a users report.When unlocked, the guardian level adds on extra content to the helper tool box:

This is a basic rundown of the system. 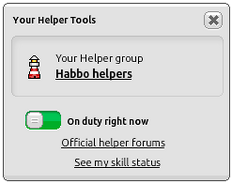 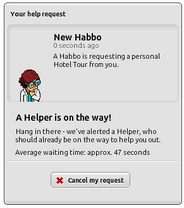 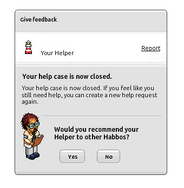 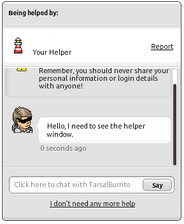 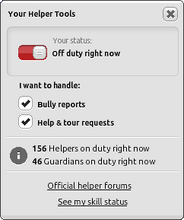