"Bigger, Better, Bouncier - it's Battle Banzai! Now YOU set the rules for your own game, in your own room. You got the Banzai Power!"

Battle Banzai is a future-like and more developed version of Battleball in Habbo. It was released on September 21, 2010. The basic concept of the game is exactly like Battleball, but with some added features and options. 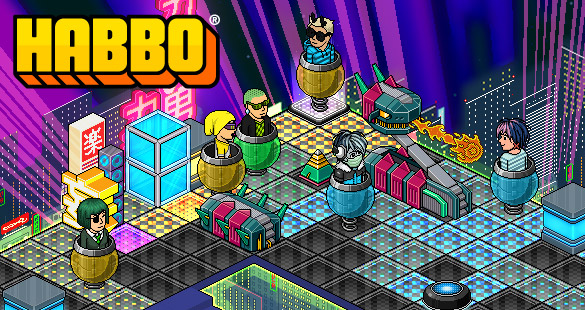 A simple game needs five different types of furni: A timer, score boards, banzai portals, borders and of course, the Banzai Tiles. To gain a bouncing ball, you go through a banzai portal for the team of your choice. The colour of the gate determines the colour of your ball. There are four coloured teams: Blue, Purple, Yellow and Green. The playing field actually varies according to the owner's placing, because tiles have to be bought.

To gain points you have to bounce on a banzai tile three times in order to lock other teams from getting the point by bouncing on it too. To get a lot of points with little effort, you have to make a shape that will enclose all of the tiles within the area, causing the whole area to be caught for your team thus giving the points the tiles hold. This is a good tactic as it can help your team gain a big amount of points with minimal effort.

The aim of the game is to lock the most tiles on the board. Either after time ends or when all the tiles in the room are locked, the winning teams' locked tiles flash on and off and the winners from the team wave automatically. Then, the game resets and all the tiles turn off allowing another game to be played.

To make things fair, there is a limit of five players per team. If a sixth player tries to get through the team's ball gate, he will not gain a battle pod, and after the game starts no one is allowed to enter the portal until the game is finished.

There is a set of achievements for Battle Banzai that are unlocked by doing various Battle Banzai related activities. These include locking tiles in a game, winning games, participating in games, and completing Battle Banzai quests.

Build an Arena, make your own game, challenge your friends and bounce your way to victory!

It's fast, it's dangerous and most importantly: IT'S BACK! Get ready for the sensational return of...

After disappearing more than a year ago, Battle Ball returns with a new name, a new style and fantastic new possibilities. From now on, you can make your own Battle Banzai Arena with the Banzai Furni and host your own games. You make the rules, the playing field, everything: you've got the power!

A quick explanation then. Battle Banzai is a game that you can play in your room with four teams of up to five players. The goal is to bounce on all the tiles and capture as many as possible. If you bounce three times on one tile, it will lock so other players can't steal it. The team with the most tiles wins!

Make your own Arena with the Banzai Furni!

The first set of Banzai Furni is now permanently available in the Catalogue. To host your own game you'll need Gates, Scoreboards, a Timer to start the game and of course (that's what it's all about) Banzai Tiles. Build a phenomenal Arena, invite all your friends and let them choose a team and start your game with the Timer.

The easiest and cheapest way to build your own Arena is to buy a starter package. In this package you'll find all the Furni you need with a 50% discount! You can choose between a package for two teams or four teams. Buy the package and you're all set for your own game!

What are you waiting for? Log in to the Hotel and play Banzai! >>

With a great game comes great responsibi... uh Achievements. You can prove your Banzai talent with three new Achievements: for locking tiles, for having a popular Arena and for winning the most games. For each Achievements there are 20 Badges to win, so there's enough to get your Banzai going! For more challenges, check out the great tournament that will start later this week. Start building your Arena or look at all the games in the Banzai Floor. You'll find all rooms there using the tag 'banzai'.

(And be sure to let us know what you think on the Pilot Forum once you have banzai'd your brains out...) - Hotel Staff

Retrieved from "https://habbo.fandom.com/wiki/Battle_Banzai?oldid=125997"
Community content is available under CC-BY-SA unless otherwise noted.